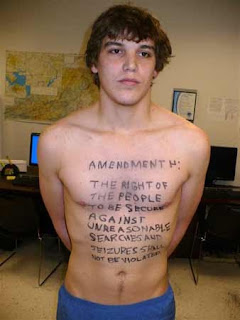 
A Virginia man who wrote an abbreviated version of the Fourth Amendment on his body and stripped to his shorts at an airport security screening area won a trial Friday in his lawsuit seeking $250,000 in damages for being detained on a disorderly conduct charge.

Aaron Tobey claimed in a civil rights lawsuit (.pdf) that in 2010 he was handcuffed and held for about 90 minutes by the Transportation Security Administration at the Richmond International Airport after he began removing his clothing to display on his chest a magic-marker protest of airport security measures.

“Amendment 4: The right of the people to be secure against unreasonable searches and seizures shall not be violated,” his chest and gut read.

Bonus: Judge quoted Ben Franklin in opinion.
Posted by Bluegrass Pundit at 9:32:00 AM