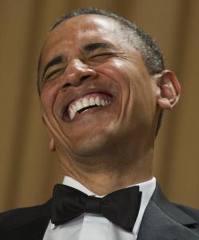 
Q John Boehner — Speaker Boehner was quoted saying that “the President’s goal is to annihilate the Republican Party.” What’s the President’s reaction to that?

MR. CARNEY: Well, I haven’t spoken to the President about that, but I know it’s not his goal. His goal is to work together with Congress, with members of both parties to achieve progress on behalf of the American people. You heard him say in the inaugural address that even though we have profound differences and differences that we will not resolve necessarily in the next year or two or three or four, it is imperative that we come together and act on behalf of the American people. And there are things that we can and must do together.

The President believes that a strong two-party system is the foundation of our democracy and looks forward to working with Republicans as well as Democrats to get things done.

Q He wouldn’t object to the annihilation of the Republican Party, would he? (Laughter.)

MR. CARNEY: I think he would object to — he believes that the two-party system is part of the foundation of our democracy, and that it is a healthy aspect of our democracy even if it’s contentious.

Ours is not the only politics in the world that is contentious and appropriately so. What he believes, however, is that we need to have spirited debates but not debates that paralyze us. We need to compromise, not be absolutists, but agree that the call — that the need to act on behalf of the American people should compel us to make reasonable compromise while we stick to our principles. And that’s the approach he’s taken since he entered the White House, and it’s the approach he intends to take in the second term.