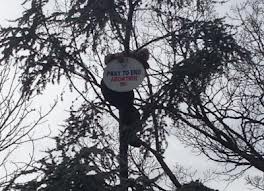 
Rives Miller Grogan has something to say. The way he says it keeps getting him in trouble at the U.S. Capitol.

Now, after the 47-year-old Californian allegedly climbed 40 feet up a tree near the Capitol reflecting pool and tried to shout down President Obama’s inaugural address on Monday, a judge has ordered him to stay away not only from Capitol building but from the District entirely.

Grogan, an antiabortion activist, eluded capture for five hours on Monday. A Capitol police spokesman said he annoyed onlookers below by loudly shouting.

He had just been arrested and charged with disorderly conduct last week, after police said he shouted from the gallery of the U.S. Senate. He’s been convicted five times in the District since 2009, mostly on charges of disorderly conduct and disobeying police. He’s typically been fined and given probation and suspended sentences that result in short jail sentences.