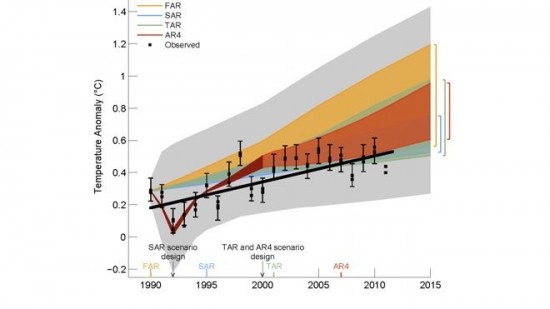 If a climate model is off this much over such a short term, it is useless for long-term forecasting...


A preliminary draft of a report by the U.N.’s Intergovernmental Panel on Climate Change was leaked to the public this month, and climate skeptics say it contains fresh evidence of 20 years of overstated global warming.

The report — which is not scheduled for publication until 2014 — was leaked by someone involved in the IPCC’s review process, and is available for download online. Bloggers combing through the report discovered a chart comparing the four temperature models the group has published since 1990. Each has overstated the rise in temperature that Earth actually experienced.

“Temperatures have not risen nearly as much as almost all of the climate models predicted,” Roy Spencer, a climatologist at the University of Alabama at Huntsville, told FoxNews.com.

“Their predictions have largely failed, four times in a row… what that means is that it’s time for them to re-evaluate,” Spencer said.

The IPCC graph shows that the midpoints of the various models predicted that the world would warm by between about 0.5 degrees Fahrenheit and 0.9 degrees Fahrenheit between 1990 and 2012. Actual warming was much less than that: 0.28 F, according the data the IPCC cites.