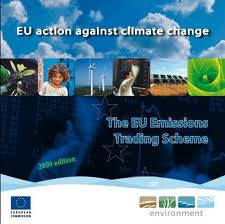 The European cap-and-trade system has slid into near meaninglessness as Germany bickers on the sidelines. Hopes that the election in Lower Saxony might resolve the high-level bickering were misguided. Now Europe's carbon market has hit a new low.

For those involved in European Union climate policy, the German regional election in Lower Saxony on Sunday was a nail-biter. The hope for many was that Germany's pro-business Free Democratic Party (FDP) would suffer defeat and leader Philipp Rösler, who has been under pressure within his party for weeks now, would be forced to step down as economics minister. But that didn't happen. Instead, Rösler ended up in a stronger position than before, and the flagship project of Europe's climate policy settled deeper into a lifeless coma.[...]

'Something Has To Be Done Urgently'

Indeed, the market for carbon credits has reached new lows. On Thursday, the price of carbon credits dropped 40 percent within 30 seconds before regaining most of the losses. In an indicator of just how vulnerable ETS threatens to become, the volatility followed a nearly meaningless vote for a non-binding recommendation by the industry committee of the European Parliament that the backloading plan be rejected.... Keep on reading...