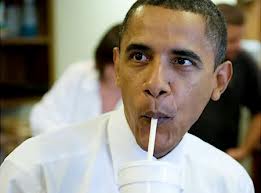 The lamestream media lets Team Obama get away with crap like this:

“Our economy is facing a major headwinds, and that’s Republicans in Congress,” Carney said.

The Commerce Department projected Wednesday that the nation’s gross domestic product (GDP) shrank by 0.1 percent in the fourth quarter of 2012.

Carney said that was partially attributable to the threat of sequestration, which would implement across-the-board spending cuts if a long-term deficit deal is not reached.
“This is political brinkmanship that results in one primary victim. That’s American taxpayers and the American middle class,” Carney said, acknowledging the GDP projection was bad news.