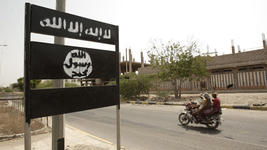 It  appears the bomb they were building exploded prematurely...


More than 10 suspected al-Qaida operatives were killed by an explosion in a house in south Yemen where they were making bombs, and at least six others died in two strikes from US drones, tribal and official sources said on Sunday.

A bomb ripped through a house in the province of al-Bayda on Saturday night, the state news agency Saba and a local official said.

Al-Qaida in the Arabian Peninsula (AQAP) is considered by Western governments to be one of the most active and dangerous wings of the global network founded by Osama bin Laden and has attempted a number of attacks against US targets.

The house destroyed in al Bayda had been used for making bombs, an official from the area told Reuters on Sunday.

“We heard a massive explosion that terrified people and when we went to the house it was destroyed and everyone there was dead,” the official said.