President Mahmoud Ahmadinejad: Prime goal of the Muslims should be terminating the issue of Zionism. 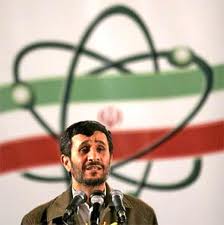 Iran will soon have a nuke bomb. What could possibly go wrong?


Tehran, Jan 27, IRNA – President Mahmoud Ahmadinejad said on Sunday that all Muslims should mobilize their resources to uproot Zionism.

He made the remarks in his speech to the 26th international conference on Islamic Unity.
He said that the prime goal of the Muslims should be terminating the issue of Zionism.

”World Muslims should forge unity in their struggle with bullying powers and by the time that the Zionist usurpers commit crimes through occupation and vandalism. It is not advisable to sit idle and take no action.”

Elsewhere in his speech, he said that it is not possible to attain unity without having a unique leadership.

The only leader who can guide Muslim World is the guidelines of Prophet Mohammad (PBUH), he underlined.