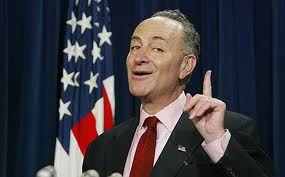 
Sen. Chuck Schumer, D-N.Y., suggested that may members of the National Rifle Association reject his gun control proposals because they have “dumb” ideas about the meaning of the Second Amendment.

“There are reasonable limitations,” Schumer said yesterday on Meet the Press. “And some in the pro gun movement and the NRA in many instances doesn’t believe in any limitation at all. That is not unconstitutional. That just is dumb.”