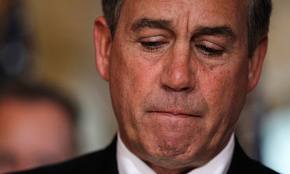 Speaker John Boehner should feel bad. Obama and democrats made a fool of him and Republicans...


Speaker John Boehner (R-Ohio) is sharing his regrets about his "fiscal-cliff" strategy, less than a month after the House bitterly swallowed a last-minute deal hatched in the Senate.

In a private speech to the Ripon Society on Tuesday, Boehner said that he should have taken a different course after the November election by immediately demanding that the Senate produce a bill to avert the worst parts of a combination of tax increases and spending cuts that were due to hit on Jan. 1.

Instead, Boehner delivered a formal speech at the Capitol on the day after President Obama won a second term, in which he offered a major Republican concession – new tax revenue as part of a broader fiscal deal.