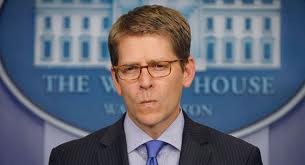 Baghdad Bob Jay can neither confirm or deny...


(CNSNews.com) – White House Press Secretary Jay Carney did not deny President Barack Obama, who oversaw a $5.8 trillion increase in the national debt during his first term, believed the country did not have a spending problem.

The Wall Street Journal reported on Jan. 6 about a conversation between Obama and House Speaker John Boehner (R-Ohio). In the article, Boehner said Obama told him, “We don’t have a spending problem.” The article quotes Boehner saying Obama told him the problem is limited to health care spending.

On Wednesday, Fox News reporter Wendell Goler asked Carney, “Boehner also reportedly said the president told him personally this country does not have a spending problem. Did that happen?”

Carney did not give a specific answer.

“Well, you know, there’s a lot of reports about conversations internally,” Carney said. “I don’t have a readout of any of the president’s personal conversations with the speaker or anyone else to provide to you.