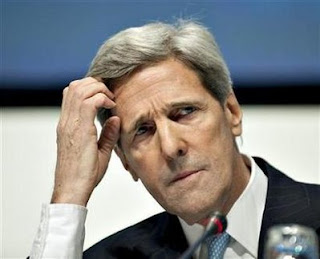 The  Pakistanis are still keeping the doctor who helped up in prison. What kind of alternate universe is Kerry living in?


Sen. John Kerry, D-Mass., opposed cutting foreign aid to Pakistan by arguing, among other things, that the Pakistanis haven’t gotten enough credit for their assistance in the operations that led to the killing of Osama bin Laden.

“Our folks were able to cooperate on the ground in Pakistan,” Kerry said during his first hearing about his nomination to replace Hillary Clinton as Secretary of State. “That’s one of the ways we were able to get Osama bin Laden. I don’t think the Pakistanis have frankly gotten credit, sufficiently, for the fact that they were helpful. It was their permissiveness in allowing our people to be there that helped us to be able to tie the knots that focused on that. To some degree — not exclusively, obviously, but to some degree.”