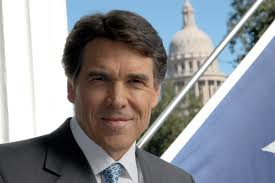 It's a shame we don't have President Perry...


AUSTIN, Texas (AP) — Gov. Rick Perry presented a glowing assessment of the Texas economy Tuesday and said there was more than enough money in the state’s Rainy Day fund for a one-time, $3.7 billion-investment in water and transportation upgrades while also cutting taxes.

The Republican governor, who for weeks has called on the Legislature to hold down government spending even with the state’s economy booming, used his biennial State of the State speech Tuesday in the House chamber to call for a one-time investment in infrastructure he said is needed to ensure a high quality of life. The Texas constitution calls for a percentage of oil and gas revenues to go into the Rainy Day Fund, which is nearing its constitutional cap.

“Our bank balance is healthy, our economy is growing, our future is limitless,” Perry said.

Perry also called on lawmakers to amend the Texas Constitution to allow the state to return tax money it collects but doesn’t spend to its citizens.

“Today, I’m calling for a mechanism to be put in place so when we do bring in more than we need, we’ll have the option of returning tax money directly to the people who paid it,” the governor said. “Currently, that’s not something our constitution allows. We need to fix that.”