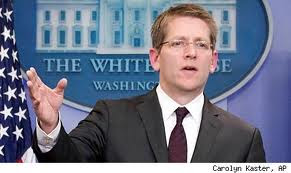 According to Carney, Obama wants a  "fiscally sustainable path" instead of a balanced budget. What the heck does that mean?


White House press secretary Jay Carney on Monday signaled that President Obama is not looking to balance the federal budget but rather to decrease the amount the country borrows each year while fostering economic growth.

“The broader effort underway here is to try to through the budget process achieve a compromise that allows for both entitlement reform and tax reform that produce the savings necessary to achieve that $4 trillion-plus targeted for 10 years of deficit reduction, to put our economy on a fiscally sustainable path, and that is the president’s goal – deficit reduction large enough to put our economy on a fiscally sustainable path so that the ratio of debt to GDP is below 3 percent in a period of time that would allow, concurrently through investments and other policy decisions, allow the economy to grow,” Carney said at a press briefing Monday.

Pressed on whether the president would present a balanced budget this year or if balancing it was a goal, Carney said he would not detail what will be in the budget proposal and pointed to previous budgets as an example of what to expect.

“The president’s budget will achieve what it has in the past, which is through sensible, balanced deficit reduction, to bring our deficit and debt into a place where we are on a fiscally sustainable path,” he said.