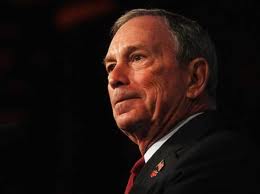 
Mayor Bloomberg was booed today as he walked in the annual St. Patrick’s Parade in hurricane-hammered Rockaway, Queens.

The jeers grew so loud toward the end of the parade that mayoral candidate and Council Speaker Christine Quinn appeared to break away from the mayor to march separately.

A spokesman for Quinn later said she always intended to walk separately from the mayor.

Locals didn’t spare their ire over the area’s slow recovery, hoisting signs reading, “Mr. Mayor, we need jetties” and “Listen to the Rockaways.”

“We’ve been dying down here, up to our ears in muck trying to rebuild, get back to a regular life,” one heckler told The Post.

“For the politicians to come down here and try to take our celebration and make it their thing … it’s disgusting.”

At the end of the route, Bloomberg thanked the Sanitation Department, said, “This was a great day for the Rockaways,” and abruptly jumped in his car.