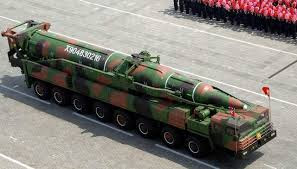 If these losers didn't have nukes, there actions would be amusing...


SEOUL — North Korea has moved two more missile launchers to its east coast, where preparations are apparently under way for a missile test as tensions simmer on the peninsula, a report said.

Expectations had been high that Pyongyang would carry out a test to coincide with celebrations marking the birth of North Korea's late founding leader Kim Il-Sung on April 15 but it did not materialise.

"We have discovered the North has moved two additional TELs (transporter erector launchers) to the east coast... after April 16," the official was quoted as saying, adding Seoul and Washington were closely monitoring the site.

BTW, did Kim Jung Un ever come out of hiding?  Before the Boston Marathon terrorist attack, he had been missing from public for over two weeks.
Posted by Bluegrass Pundit at 5:43:00 AM