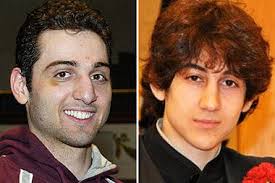 Barack Obama, liberals and the mainstream media are shocked. The rest of America merely acknowledges the obvious...


BOSTON (AP) -- The 19-year-old charged with the Boston Marathon bombing, his throat injured by a gunshot wound, wrote down answers to the questions of investigators about his motives and connections to any terror networks.

Dzhokhar Tsarnaev's answers led them to believe he and his brother were motivated by a radical brand of Islam without major terror connections, said U.S. officials, who spoke on condition of anonymity because they were not authorized to discuss the investigation publicly.

But the written communication precluded back-and-forth exchanges often crucial to establishing key facts and meaning, said officials who cautioned they were still trying to verify what Tsarnaev told them and were poring over his telephone and online communications.