Unlikely: Iranian president Mahmoud Ahmadinejad claims promiscuous women will cause earthquakes or something... 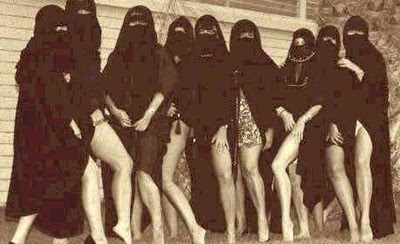 Calling Ahmadinejad crazy is a disservice to crazy people everywhere...


Iranian president Mahmoud Ahmadinejad predicts that an earthquake will hit the country’s capital of Tehran and displace its 12 million residents. The cause of the catastrophic quake? Promiscuous women, reports The Guardian.

“Many women who do not dress modestly ... lead young men astray, corrupt their chastity and spread adultery in society, which increases earthquakes,” Hojatoleslam Kazem Sedighi, a senior Iranian cleric and seismologist, was quoted by Iranian media.

Its all that desert Air and Sand between his ears..This causes his Brain Cells to shut down. This then causes each cell to lack the ability to send electrical signals back and forth. The eyes are part of the Brain so that means he is also blind as a billy goat therefor he only sees the twisted hog wash in his brain..Thats why they are radical shim sham men selling snake oil so the fools that follow them buy it all up to try to clean their brains too.