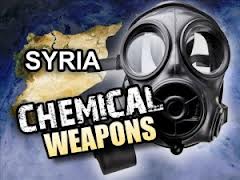 This is the "game changer" Obama warned Syria cabout. What now?


UNITED NATIONS — Britain and France have informed the United Nations that there is credible evidence that Syria used chemical weapons on more than one occasion since December, according to senior diplomats and officials briefed on the accounts.

In letters to U.N. Secretary General Ban Ki-moon, the two European powers said soil samples, witness interviews and opposition sources support charges that nerve agents were used in and around the cities of Aleppo, Homs and possibly Damascus, the officials said, speaking on the condition of anonymity because of the sensitivity of the matter.

The European accounts are in part aimed at countering accusations by the Syrian government that opposition forces had fired chemical weapons during fighting in the town of Khan al-Asal near Aleppo on March 19, killing 26 people, including Syrian troops.

European diplomats acknowledge that Syrian forces may have been exposed to chemical agents during the attack, but they say it was a “friendly fire” incident in which the troops were hit when a government shell missed its opposition target.