Obama's Department of Agriculture advertizing to get more illegal immigrants on food stamps... 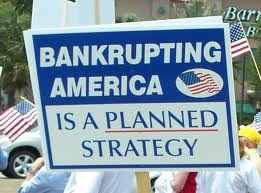 Here is Obama and liberal democrats plan:
Via Washington Examiner:


With food stamp spending in the United States skyrocketing since the beginning of the recession, the Department of Agriculture is paying to promote food stamp usage to illegal immigrants for the sake of their American children, according to documents obtained by a government watchdog.

“The promotion of the food stamp program, now known as “SNAP” (Supplemental Nutrition Assistance Program), includes a Spanish-language flyer provided to the Mexican Embassy by the USDA with a statement advising Mexicans in the U.S. that they do not need to declare their immigration status in order to receive financial assistance,” Judicial Watch announced today.  “Emphasized in bold and underlined, the statement reads, ‘You need not divulge information regarding your immigration status in seeking this benefit for your children.’”

The USDA said the program is designed to help American children. “[The USDA Food and Nutrition Service] understands that mixed status households may be particularly vulnerable,” FNS’ Yibo Wood wrote to Mexican embassy officials in a January 2012 email.   “Many of these households contain a non-citizen parent and a citizen child.”