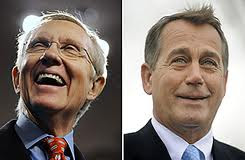 Get the torches and pitchforks ready. if lawmakers exempt themselves from Obamacare, it's time for a trip to Washington...


Congressional leaders in both parties are engaged in high-level, confidential talks about exempting lawmakers and Capitol Hill aides from the insurance exchanges they are mandated to join as part of President Barack Obama’s health care overhaul, sources in both parties said.

The talks — which involve Senate Majority Leader Harry Reid (D-Nev.), House Speaker John Boehner (R-Ohio), the Obama administration and other top lawmakers — are extraordinarily sensitive, with both sides acutely aware of the potential for political fallout from giving carve-outs from the hugely controversial law to 535 lawmakers and thousands of their aides. Discussions have stretched out for months, sources said.

A source close to the talks says: “Everyone has to hold hands on this and jump, or nothing is going to get done.”

Yet if Capitol Hill leaders move forward with the plan, they risk being dubbed hypocrites by their political rivals and the American public. By removing themselves from a key Obamacare component, lawmakers and aides would be held to a different standard than the people who put them in office.