Two women shot by out of control cops during Dorner manhunt get $4.2 million settlement... 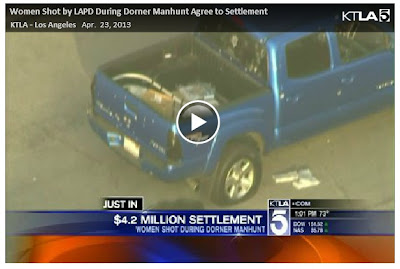 Good for them. So, what happened to the out of control cops who used two women delivering newspapers for target practice?

Details of the deal were not released; a statement from Trutanich's office said they would be made available at a 2 p.m. news conference.

Margie Carranza, 47, and her mother, Emma Hernandez, 71, were delivering newspapers in Torrance on Feb. 7 when LAPD officers fired repeatedly on their blue Toyota Tacoma. Hernandez was shot twice in the back, and Carranza was injured by broken glass, an attorney for the women said.