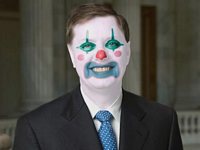 
Vice President Joseph R. Biden Jr. offered Sen. Lindsey Graham his support for re-election — including a pledge to “rip your skin off for you” if it helps the South Carolina Republican’s 2014 prospects.

“I told him I’ll come to South Carolina and campaign for him or against him, whichever will help the most — I know which it’ll be,” Biden said at an April 26 forum hosted by The McCain Institute for International Leadership. ”I’m going down there to to the JJ next weekend, Lindsey, and I assure you I will rip your skin off for you, and I expect a thank-you note.”

The offhand comment points to the possibility that Graham could face a 2014 primary challenge. He’s a target of conservative Republicans for several reasons, including his work on the Senate’s bipartisan “gang of eight” immigration bill and his foreign policy views.