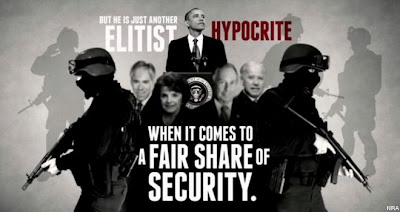 The NRA is too smart to be hoodwinked by this worthless piece of legislation. The bill was so pooly written, Obama and Holder would have interpreted it to mean something other than the RINO's who voted for it intended.


WASHINGTON — President Barack Obama held an emotional press conference in the Rose Garden this afternoon reacting to the failure of legislation to expand background checks on gun sales in the Senate. After being introduced by the father of a child killed at last year’s shootings in Newtown, Connecticut, Obama attributed the defeat of the bipartisan background check compromise to “untruths” about the bill spread by the National Rifle Association.

“The current leader of the nra used to support these background checks. So while this compromise didn’t contain everything I wanted or everything that these families wanted, it did represent progress. It represented moderation and common sense,” Obama said. “That’s why 90 percent of the American people supported it. But instead of supporting this compromise, the gun lobby and its allies willfully lied about the bill.”

Obama said the NRA exaggerated the effect of the bill, which scared gun owners and mobilized them to oppose the legislation.

Where are these people?

Come out come out where ever you are, and then realize that we already have background checks, the Newtown shooter was DENIED a gun because of a background check, and he STILL got his hands on guns and killed innocent kids.

Another thing is that my understanding is that ALL of the victims were shot with HANDGUNS and that the rifle that the media is so adamant about was found in the trunk of the car sitting out front of the school.

Inform me if I am wrong.

And I would suggest that the majority of the "people" belive that the rifle was used in the Newtown shootings.

It's all smoke and mirrors.