Why is NJ Gov Chris Christie hiding records of where federal funding for Hurricane Sandy victims is going? 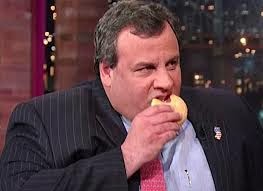 Perhaps he is using this money as his secret doughnut fund...


The Asbury Park Press, a southern New Jersey newspaper, reported on Friday that the paper has been requesting information from Chris Christie’s administration for months on where federal funding for Hurricane Sandy victims is going–requests that, so far, have yielded nothing in return.
In a report by the Press’s Bob Jordan, the paper notes that the Christie administration had promised they would release government records of how Sandy funds were being used–both federal funds (requested by the Fair Share Housing Center) and private funds from contracts (requested by the Press). To the paper’s request, the state had answered that they would be sharing “hundreds” of files on the matter, including those surrounding funds for the statewide “Stronger than the Storm” ad campaign, “on a rolling basis” starting in October.
Having heard nothing of the sort out of Trenton, the paper aired its grievances with Christie on Friday.
Keep on reading…