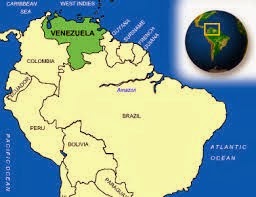 Venezuela claims to have the largest oil reserves in the world.

It turns out that Venezuela’s own production of light crudes has plummeted since the late President Hugo Chávez took office in 1999, and the country desperately needs light crudes to blend with its Orinoco Basin extra heavy crude oils. Without such a blend, the Orinoco Basin’s extra heavy crude is too dense to be transported through pipelines to Venezuelan ports and exported abroad.
Venezuela’s oil production, which accounts for 95 percent of the country’s export earnings, should be used in world classrooms as a textbook case of what happens when a populist government starts distributing a country’s wealth in cash subsidies, without investing in maintenance and innovation. Much like happened with Cuba’s once flourishing sugar industry, Venezuela’s Chávez-inspired populism has destroyed the goose that laid the golden eggs.