Nearly half of Americans responded that they were losing freedoms under an Obama administration according to a new scientific poll.
Wenzel Strategies reported:

June 16, 2009 - A new Wenzel Strategies poll shows nearly half of all adults in America believe there has been a decrease in personal freedom under the Obama administration, which signals a significant degree of alarm across a wide swath of the country over where the new President may be taking the country. The country has seen some dramatic governmental intervention over the course of the last five months, and some Americans may be reacting with fear to the speed with which Washington is acting. 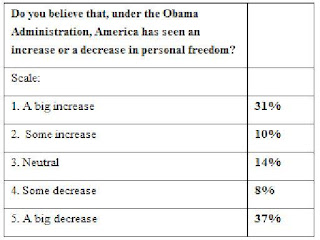 Can someone tell me how the figure "nearly half of all Americans" was arrived at?

There appears to be a distortion here. While "nearly half of all those polled" may have said that, I still think that is a stretch to say 37% is nearly half.

But WHAT freedoms are we losing?