"We have made a strategic decision to engage on a number of fronts with Iran," Kelly said. "We tried many years of isolation, and we're pursuing a different path now." Link here.

During the White House Press conference Tuesday, Major Garrett asked President Obama if the invitation was still valid. Obama equivocated, but did not cancel the invitation. Garrett also asked Obama what took him so long to respond on Iran.


Meanwhile, the Iranian regime and Mullahs continue to slaughter their own citizens. 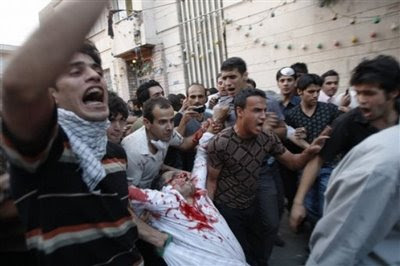 How anyone could enjoy a hot dog with the diplomats of a country doing this is beyond me.
Posted by Bluegrass Pundit at 4:27:00 AM

Of course you do, Make war not peace,right?