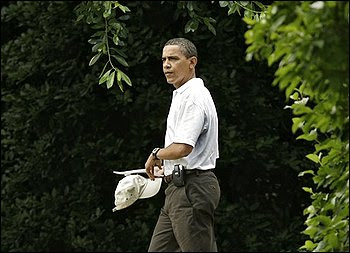 President Obama kept silent on Iran on Sunday. He went on a Father's Day golf outing. Republicans are criticizing his very low key approach. President Obama hasn't even called for a recount of the vote in Iran. Some Iranians are also criticizing Obama. Iranian student activist Ahmad Betebi who was sentenced to death by the evil regime in Iran after the student protests of 1999, but later escaped to the US said,

"His (Obama) lack of response will not be regarded lightly. We will watch for how much his response will help the people or the regime. We will know more this week... Obama can hold talks with the regime in Iran if he wants. Is it morally correct for Obama to support the regime? Does he actually believe the people of Iran will appreciate that? The social movement requires support. If the world really wants the advent of terrorism to disappear in the Middle East, if they want peace with the Palestinians and Israel, if they want nuclear techhology to be developed for peaceful things and not nuclear weapons... They only need to support the people of Iran right now. This regime has the most dangerous of ideologies. They're killing the opposition.

According to the Boston Globe:

Tehran's streets fell mostly quiet for the first time since a bitterly disputed June 12 presidential election, but there were reports that government forces appeared to be pressing arrests of defiant protesters after the official death toll swelled to at least 17.

The White House did not book any surrogates on the Sunday talk shows to defend or explain the administration's approach. Republicans used their broadcast appearances to call the president timid or feckless, while the Democrat who leads the Senate Intelligence Committee said the U.S. had no hand in the disputed election.

Like other Democrats who spoke Sunday, Sen. Dianne Feinstein backed the president's approach.

"It is very crucial as I see that we not have our fingerprints on this," she said, "that this really be ... truly inspired by the Iranian people. We don't know where this goes."

A day earlier, Obama invoked the American civil rights struggle to condemn violence against demonstrators, some of whom have carried signs in English asking, "Where is My Vote?"

It was his strongest statement on what has become the most significant challenge to Iran's ruling structure since the Islamic revolution 30 years ago, but it stopped short of demanding a recount or new election, as many of the demonstrators seek.

“Iran” The question is who is creating this madness?

“The Israelites have ravaged this land (Palestine) through plunder and murder, they have killed their friends with whom they had drunk wine, and they have deceived and misled their fellow believers of the Jewish cult, who are truly not Israelites but merely believers in a cult.

Thus the Israelites betrayed their own friends and murdered them because of their greed, but it shall likewise be done to them by the rightful owners of this land whom they have deprived of their rights and subjugated since ancient times.”

- The Talmud of Jmmanuel, the gospel of The Christ manifestation on earth that the Pharisees do not wish for us to read.

Next question; why is this madness being allowed? Is it about greed or power? Or is it part of a perfect plan to restore the service-to-others orientation within the soul of humanity?

If we do not read to understand material outside of the control matrix, we then have nothing to stand on but more of our own speculations based on the disinformation created by the controlled medias.