From American Thinker: Breakthrough on the Authorship of Obama's 'Dreams' 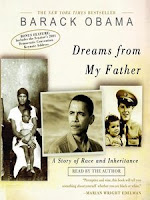 Many people have speculated that Bill Ayers actually wrote Obama's book Dreams From My Father. Unfortunately, there is no reliable computer science for determining authorship. Jack Cashill has been a leader in analysis by the traditional methods. His conclusion carries authority. You will need to read the entire article to understand his evidence and conclusion. I have excerpted the first part here.

Within days of my going public last September with the speculation that terrorist emeritus Bill Ayers helped Barack Obama write his acclaimed memoir, Dreams From My Father, I learned that I was not alone in that intuition.

Since then, I have received helpful contributions from serious people in at least five countries and any number of states and have integrated many of their observations into my ongoing narrative, summarized here. If you are unfamiliar with this research, please read this before going forward.

About a week ago, however, I heard from a new contributor. I will refer to him as "Mr. West." Like most contributors, he prefers to remain anonymous. The media punishment that Joe the Plumber received has much to do with this nearly universal reticence.

A week before that, I heard from another excellent contributor, Mr. Midwest. Their collective contribution should dispel the doubts of all but the willfully blind that Ayers played a substantial role, likely the primary role, in the writing of Dreams. (accent is mine)