Debbie Rowe admits Michael Jackson did not father her children 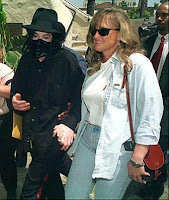 The tabloid 'News of the World' claims to have done an exclusive interview with the mother of Michael Jackson's oldest children and she dropped some bombshells.

According to News of the World:

MICHAEL Jackson's two eldest kids face a tug-of-love battle after their mum Debbie Rowe confessed he was not their father.

In an astonishing interview Debbie - mother of Prince, 12, and Paris, 11 - said she was artificially inseminated by an anonymous donor.

And she told how, despite Jackson's death, she does not WANT custody of the children and NEVER expects to see them again.

It means Prince and Paris now face a doubtful future, effectively without parents and the subject of a fight to find them a permanent and stable family home.

Debbie Rowe made several other interesting statements. Details are here.
Posted by Bluegrass Pundit at 7:52:00 AM

I loved your article about Michael Jackson. I have a website about cash advance payday loans online . I will add a link from my website to your blog as I think my visitors can find lots of interesting on your blog. Thank you.