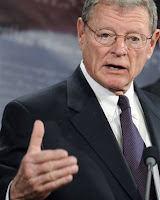 Cap and Trade has passed the House, but it will have a tougher time in the Senate. Sen.Jim Inhofe (R-OK) has declared it dead on arrival.

Passing President Obama's cap and trade energy program would cost the average Oklahoma family $3,200 a year, Sen. Jim Inhofe said Friday, but he's confident the measure will be killed in the Senate no matter what happens in the House of Representatives.

The Tulsa Republican, a longtime critic of what he considers 'this hoax called global warming,' made his latest statements during a morning stop in Shawnee while House members in Washington were preparing to vote on the controversial issue.

"Between the years of 1998 and 2005, I was the only member of the United States Senate who would take on what I call 'the Hollywood elitists' and the United Nations on this hoax called global warming and I went through seven years of purgatory on that issue.

But now I've been redeemed and the vast majority of the scientific community has now said Inhofe's right and the United Nations is wrong and those individuals have now said no, the science is not there and these are natural cycles."

This disastrous legislation would never have passed the House without the votes of eight turncoat Republicans. Fifty Democrats joined the Republican minority in opposition to this bill. Here are the names of the Republican turncoats.
Bono Mack
Castle
Kirk
Lance
LoBiondo
McHugh
Reichert
Smith (NJ)
Complete vote tally here.

Vodkapundit: “Never have so few stolen so much from so many to achieve so little.”

Let's hope and pray Blue as this piece of crud is treason to the American worker and taxpayer.

This whole 111th congress needs to be removed and prosecuted for treason after these past 6 months of shredding our constitution starting with Barry's missing history starting with the BC on up.

It better die in the Senate...or we're simply screwed.