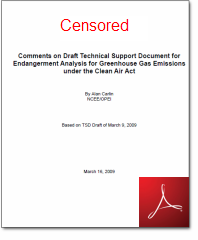 The nonprofit group, Competitive Enterprise Institute, earlier released the internal EPA emails indicating an 'inconvenient' global warming study was being suppressed by the Obama administration prior to the House vote on Waxman-Markey. Now, they are releasing the full text of the report. This report finds that EPA is relying on outdated research and is ignoring major new developments. Under the direction of the Obama administration, EPA is now participation in the biggest scam in the history of mankind.

Washington, D.C., June 26, 2009—The Competitive Enterprise Institute is today making public an internal study on climate science which was suppressed by the Environmental Protection Agency. Internal EPA email messages, released by CEI earlier in the week, indicate that the report was kept under wraps and its author silenced because of pressure to support the Administration’s agenda of regulating carbon dioxide.

The report finds that EPA, by adopting the United Nations’ 2007 “Fourth Assessment” report, is relying on outdated research and is ignoring major new developments. Those developments include a continued decline in global temperatures, a new consensus that future hurricanes will not be more frequent or intense, and new findings that water vapor will moderate, rather than exacerbate, temperature.

New data also indicate that ocean cycles are probably the most important single factor in explaining temperature fluctuations, though solar cycles may play a role as well, and that reliable satellite data undercut the likelihood of endangerment from greenhouse gases. All of this demonstrates EPA should independently analyze the science, rather than just adopt the conclusions of outside organizations. (accent is mine)