According to Rasmussen, President Obama's Presidential Approval Rating is -2. This ties his all time low. Thirty-three percent (33%) of Americans and 60% of Republicans strongly disapprove of Obama.

The Rasmussen Reports daily Presidential Tracking Poll for Tuesday shows that 31% of the nation's voters now Strongly Approve of the way that Barack Obama is performing his role as President. Thirty-three percent (33%) Strongly Disapprove giving Obama a Presidential Approval Index rating of -2. That matches the lowest level yet recorded. 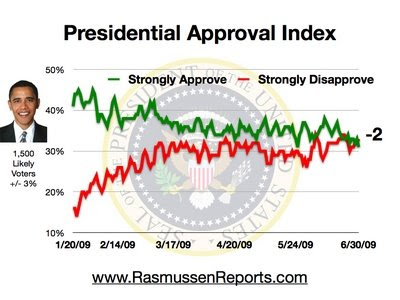 A Pew poll agrees with the 61% rating, but the Times-CBS survey put Obama’s approval rating at 63 percent. The Journal-NBC poll gave Obama a 56 percent job-approval rating.

You've got to remember, polling is still more of an art than a science.