Obama Refuses to Rule Out Releasing Terrorists in US 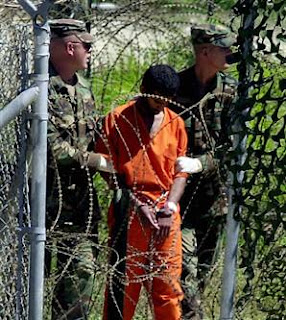 President Obama is having great difficulty with his plan to close Gitmo by January. This week he sent some Uighur detainees to Bermuda, a British territory, and angered the British because they were not consulted. The Guardian reported:

The foreign secretary, David Miliband, is understood to have had a tense telephone conversation with the US secretary of state, Hillary Clinton, about why London was not consulted about the resettlement of the four men, despite the fact that Britain has colonial powers over Bermuda's foreign and security policy.

Congress overwhelmingly voted to refuse closure funding over fears terrorists would be released in the US. President Obama is refusing to rule out this option.
AP reported via Google Hosted News:

WASHINGTON (AP) — A White House spokesman says the Obama administration hasn't decided whether or not to release Guantanamo Bay detainees in the United States.

Spokesman Robert Gibbs said President Barack Obama has made clear "we're not going to make any decision about transfer or release that threatens the security of this country."

Asked if that meant he was ruling out releasing any detainees in the United States, Gibbs said: "I'm not ruling it in or ruling it out."

A tentative plan to release some Guantanamo detainees in the United States drew fierce opposition from Republicans and many Democrats in Congress, forcing the Obama administration to shelve the plan to bring some Chinese Muslims known as Uighurs to Virginia. The Uighur detainees at Guantanamo were found not to be enemy combatants by the Pentagon, but few nations have been willing to accept them, out of fear of angering China.

This past week, four of the 17 Uighurs being held at Guantanamo were sent to Bermuda, and the Pacific islands nation of Palau said it would accept others.