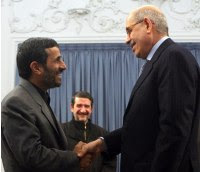 LONDON, June 17 (Reuters) - Iran wants the ability to build nuclear weapons to gain the reputation of a major power in the Middle East, the head of the U.N. nuclear watchdog said in a BBC interview broadcast on Wednesday.

Iranian President Mahmoud Ahmadinejad’s disputed re-election has cast doubt on Western powers’ hopes of a new dialogue with Iran over its nuclear programme, which Iran says is for producing electricity only, not atomic bombs.

Hat tip to Little Green Footballs.
Posted by Bluegrass Pundit at 6:19:00 AM