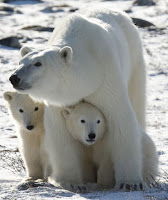 The lengths the anthropogenic global warming 'cult' will go to in order to suppress the truth knows no bounds. They are now suppressing a polar bear because it does not support their global warming scam.

As the U.S. Senate now prepares to consider the cap-and-trade climate bill recently passed by the House, they will want to consider all the facts related to this landmark spending program. So far we have learned that the Environmental Protection Agency has suppressed an internal report skeptical about the wild global warming claims and now, from across the pond, we find out that a polar bear expert has been forbidden by global warming alarmists from reporting that most of those animals have actually been increasing in population during the past few years or are at optimum levels.

Although you won't find this story anywhere in the American media, Christopher Booker of the UK Telegraph has delivered an excellent report on this inconvenient truth suppression:

Over the coming days a curiously revealing event will be taking place in Copenhagen. Top of the agenda at a meeting of the Polar Bear Specialist Group (set up under the International Union for the Conservation of Nature/Species Survival Commission) will be the need to produce a suitably scary report on how polar bears are being threatened with extinction by man-made global warming.

This is one of a steady drizzle of events planned to stoke up alarm in the run-up to the UN's major conference on climate change in Copenhagen next December. But one of the world's leading experts on polar bears has been told to stay away from this week's meeting, specifically because his views on global warming do not accord with those of the rest of the group.