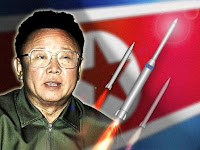 Since we are putting a missile defense shield around Hawaii, North Korea is accusing the US of preparing for a preemptive attack against them.

SEOUL, South Korea -- North Korea criticized the U.S. on Monday for positioning missile defense systems around Hawaii, calling the deployment part of a plot to attack the regime and saying it would bolster its nuclear arsenal in retaliation.

U.S. Defense Secretary Robert Gates has said he ordered the deployment of a ground-based, mobile missile intercept system and radar system to Hawaii amid concerns the North may fire a long-range missile toward the islands, about 4,500 miles away.

"Through the U.S. forces' clamorous movements, it has been brought to light that the U.S. attempt to launch a pre-emptive strike on our republic has become a brutal fact," the North's main Rodong Sinmun newspaper said in a commentary.

The paper also accused the U.S. of deploying nuclear-powered aircraft and atomic-armed submarines in waters near the Korean peninsula, saying the moves prove "the U.S. pre-emptive nuclear war" on the North is imminent.

The commentary, carried by the official Korean Central News Agency, said the North will bolster its nuclear arsenal in self-defense.

So let me get this straight. First North Korea launches short, mid and long range missiles, detonates a nuclear bomb, threatens nuclear war, announces it's going to launch a missile towards Hawaii on Independence Day and the US is gearing for war?

Can you guess who else is against a missile defense shield....President Obama.