Obama is restoring relations with despots 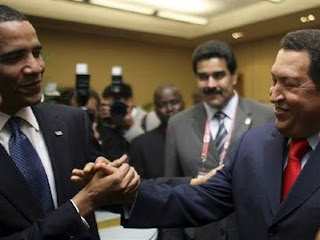 President Obama has decided to restore diplomatic relations with the despotic leaders of Syria and Venezuela.
The AP reported:

President Barack Obama plans to return an ambassador to Syria, filling a post that has been vacant for four years and marking an acceleration of Washington's engagement with the Arab world, the White House said on Wednesday.

Presidential spokesman Robert Gibbs said Obama's decision was aimed at fulfilling his promise to show more U.S. engagement in the Arab world and not a response to any explicit policy change on Syria's part.

He cited a series of meetings between Syrian and U.S. officials since Obama took office.

"This strongly reflects the administration's recognition of the role Syria plays, and the hope of the role that the Syrian government can play constructively, to promote peace and stability in the region," Gibbs said.

The United States and Venezuela are to reinstate ambassadors to Caracas and Washington, setting aside a diplomatic spat that soured ties last year.

The two nations expelled each other's envoys last September in a dispute involving allegations by Bolivia, a close ally of Venezuela, that Washington was meddling in its internal affairs.

The normalisation of diplomatic ties "will take place in the coming days, and as soon as the ambassadors have resumed their functions we will move forward to a more fluid communication," Nicolas Maduro, the Venezuelan foreign minister, said on Wednesday.