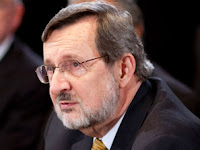 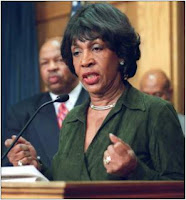 David Obey and Maxine Waters engaged in a shouting and shoving match over their beloved earmarks. Please tell me there is video and pass some popcorn.

An altercation erupted on the House floor Thursday evening between House Appropriations Committee Chairman Dave Obey (D-Wisc.) and Rep. Maxine Waters (D-Calif.).The incident stemmed from Rep. Obey's refusal to fund an earmark that Rep. Waters requested, sources told FOX. Waters specifically wanted federal money set aside for an institute named after her. Obey, who is skeptical of many earmarks, has long refused to fund any more "monuments to me." The institute in question was named for Waters before she requested the earmark.Upon Obey's refusal, Waters insisted Obey reward the money instead to a school that could serve as a conduit to the institute, but Obey told Waters that wasn't acceptable and "became irate," said a source.Obey tried to walk away from Waters, but she continued to browbeat the Appropriations Committee Chairman and followed him around the House floor, according to reports."She was in his face," a source said.Other media reported that the altercation evolved into a "shoving match." Those reports could not be confirmed.Ellis Brachman, a spokesman for Obey said that Waters "accosted" his boss and "made a scene."Attempts to reach Waters for comment were unsuccessful.

More from The Hill:

“You’re out of line,” Waters shot while walking down toward the well.

“You’re out of line,” Obey shot back before turning and walking away.

But then Obey stopped, turned back toward Waters, and shouted; “I’m not going to approve that earmark!”

Obey turned away, but Waters went to go huddle with members of the Congressional Black Caucus. She could be over heard telling them; “He touched me first.”…

A Waters aide said that Obey had pushed her.