Conservatives have passed liberals and moderates and are now the largest ideological group according to the latest Gallop poll.

PRINCETON, NJ -- Thus far in 2009, 40% of Americans interviewed in national Gallup Poll surveys describe their political views as conservative, 35% as moderate, and 21% as liberal. This represents a slight increase for conservatism in the U.S. since 2008, returning it to a level last seen in 2004. The 21% calling themselves liberal is in line with findings throughout this decade, but is up from the 1990s. 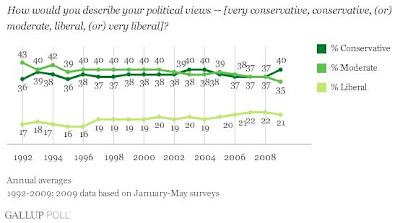