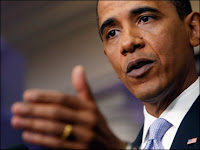 President Obama set up an Iran question with a reporter for the left wing web site Huffington Post. That is one way to avoid embarrassing or difficult to answer questions.
From Politico:

In what appeared to be a coordinated exchange, President Obama called on the Huffington Post's Nico Pitney near the start of his press conference and requested a question directly about Iran.

“Nico, I know you and all across the Internet, we've been seeing a lot of reports coming out of Iran,” Obama said, addressing Pitney. “I know there may actually be questions from people in Iran who are communicating through the Internet. Do you have a question?”

Pitney, as if ignoring what Obama had just said, said: “I wanted to use this opportunity to ask you a question directly from an Iranian.”

He then noted that the site had solicited questions from people in the country “who were still courageous enough to be communicating online.”

“Under which conditions would you accept the election of Ahmadinejad, and if you do accept it without any significant changes in the conditions there, isn't that a betrayal of the — of what the demonstrators there are working towards?”

Reporters typically don’t coordinate their questions for the president before press conferences, so it seemed odd that Obama might have an idea what the question would be. Also, it was a departure from White House protocol by calling on The Huffington Post second, in between the AP and Reuters.

CBS Radio's Mark Knoller, a veteran White House correspondent, said over Twitter it was "very unusual that Obama called on Huffington Post second, appearing to know the issue the reporter would ask about."

According to POLITICO's Carol Lee, The Huffington Post reporter was brought out of lower press by deputy press secretary Josh Earnest and placed just inside the barricade for reporters a few minutes before the start of the press conference.