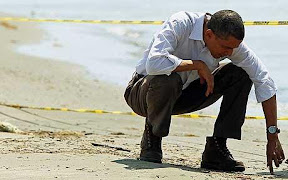 Americans are comparing President Obama's poor handling of the Gulf oil spill with President Bush's handling of Hurricane Katrina. 57% say his response is the same or worse...

President George Bush’s handling of Hurricane Katrina was a black mark on his administration, and now, there’s bad news for his successor. Nearly six in ten voters nationwide — 57% — say President Barack Obama’s handling of the oil spill in the Gulf of Mexico is either the same or worse than Bush’s handling of Katrina. This includes 34% who report Obama’s management of the disaster is comparable and 23% who view it as worse. 37%, however, say he is handling the crisis better than Bush managed Katrina. 6% are unsure.