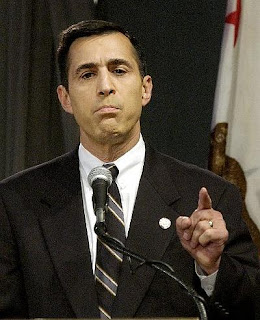 If When Republicans take control of the House after this year's elections, Rep. Darrell Issa will likely become chairman of the House Oversight and Government Reform Committee in 2011. He is planning on almost doubling it's staff and launching investigations into wrong-doing by the Obama administration. Hmm...

Rep. Darrell Issa, the conservative firebrand whose specialty is lobbing corruption allegations at the Obama White House, is making plans to hire dozens of subpoena-wielding investigators if Republicans win the House this fall.

Issa has told Republican leadership that if he becomes chairman, he wants to roughly double his staff from 40 to between 70 and 80. And he is not subtle about what that means for President Barack Obama.