SCOTUS Nominee Sotomayor on Right to Bear Arms: "it is the law of the land right now ..." She's Had a Change of Heart. 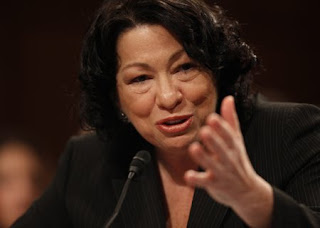 During her Senate confirmation hearings, Sonia Sotomayor talked like the right to bear arms under the Second Amendment was settled law.

Sotomayor earlier acknowledged the Supreme Court's 2008 decision that overturned Washington, D.C.'s restrictive handgun law, noting that "it is the law of the land right now in the sense of precedent, that there is an individual right to bear arms as it applies to government, federal government regulation," she said.

The Supreme Court overturned Chicago's ultra restrictive handgun ban Monday by a vote of 5-4. Justice Sotomayor was one of the four dissenting Justices.

Justices John Paul Stevens and Stephen Breyer, joined by Justices Ruth Bader Ginsburg and Sonia Sotomayor, each wrote a dissent. Stevens said that unlike a ruling two years ago overturning a Washington, D.C., handgun ban, Monday's decision "could prove far more destructive — quite literally — to our nation's communities and to our constitutional structure."

Never believe anything a liberal tells you.
Posted by Bluegrass Pundit at 4:54:00 PM

Musings from the Smartest Man in the World said...

They lie and our spineless leaders will vote to confirm what's his name, I mean what's her name Kagan. From what she's NOT saying it should be obvious that she's much more liberal than anyone so far.