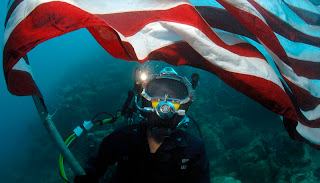 The Jones act prohibits ships from carrying goods between US ports unless they are owned and crewed by US Citizens. This is hampering foreign assistance with the oil spill clean up.

U.S. Rep. Charles Djou is calling on President Barack Obama to waive a 90-year-old law so foreign ships can help respond to the huge oil spill in the Gulf of Mexico.

The statute, known as the Jones Act, requires vessels transporting goods between states to have been built in the United States, be crewed and owned by U.S. citizens, and fly the U.S. flag.

Djou says it has blocked vessels from Mexico, Canada and Belgium from assisting in the cleanup.

A Republican, Djou opposes the statute because he contends it results in higher prices for Hawaii consumers.

Team Obama has only accepted help from 5 of the 28 countries that offered.
Posted by Bluegrass Pundit at 5:37:00 PM