Why Did "Propeller Head" Leave The Obama Administration? 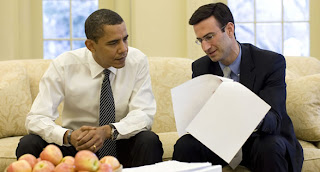 A week ago, President Obama's budget director, Peter Orszag, suddenly announced he was leaving the administration in July. Orszag was nicknamed "Propeller Head" by Obama for being a spreadsheet whiz. So why did is he leaving? The Federal Budget outlook for 2011 looks bleak. Peter Orszag is a deficit foe, but without draconian spending cuts or large tax increases on the middle-class, there is no way to resolve the deficits. Reportedly, Orszag has been advocating President Obama throw off the last tattered remains of his "raise no taxes on households earning less than $250,000 a year pledge" and raise taxes on the middle-class.

“Mr Orszag, whom Mr Obama has dubbed a “propeller-head” because of his brilliant facility with projections and spreadsheets, has tried but failed to convince his colleagues to “step up the action”, according to one insider.

In particular, he has collided with the political team, led by Rahm Emanuel, Mr Obama’s chief of staff, over Mr Obama’s 2008 election pledge not to raise taxes on any households earning less than $250,000 a year – a category that covers more than 98 per cent of Americans.

Economists say that would put all the fiscal emphasis on draconian – and highly unrealistic – spending cuts, or else pushing the marginal tax rates on the very rich to confiscatory levels...

Of course, Democrats lack the political will and intestinal fortitude to support large taxes on the middle class or serious cuts to social programs popular with their base voters this close to the 2010 election cycle. So, what do democrats plan to do? They are going to abandon their responsibility and not make a budget until after the November elections.

The Democrats in Congress believe what Rep. Gerry Connolly told the LA Times, which is that no member of Congress ever lost an election because of a failure to pass a budget. They don't want to be on the hook for the hard decisions that must come in FY2011, which is either to drastically reduce spending from the binge levels of the last three Democratic Congresses, or to raise taxes to cover it. Spending cuts won't change voter perception of this Congress at this late date -- and tax hikes will make it worse.

Spratt is right -- a failure to budget is a failure to govern. Democrats seem intent on proving their unworthiness to lead Congress in even its most basic tasks. At the same time, their leadership wants voters to trust them to make the most personal of decisions in their health care, as well as believe that they can cool the planet and lower the sea level with punitive taxes on energy production and boondoggles in alternative energy.

After the November election, look for a full-court press from a lame duck Democratic Congress and President Obama to raise taxes on "households earning less than $250,000 a year." It looks like Peter Orszag is unwilling to twiddle his thumbs for the next five months while this farce unfolds.
Posted by Bluegrass Pundit at 7:39:00 AM