Gallop Poll Finds Record Number of Conservatives: Twice as Many as Liberals 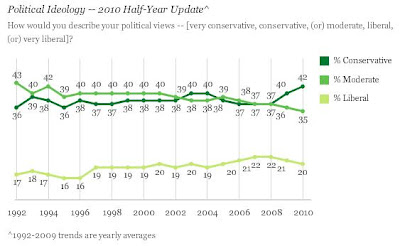 President Obama is following his roots and taking us on a hard left turn. Americans are revolting by turning to the right. A new Gallop poll has found a record number of conservatives. Conservatives now outnumber liberals 42% to 20%. Moderates make up most of the balance at 35%.

In new Gallup numbers released this morning, 42 percent of Americans describe themselves as conservative while 35 percent say they are moderates and 20 percent call themselves liberals.