Report: General Stanley McChrystal Resigns After Being Called On The Carpet For Telling The Truth 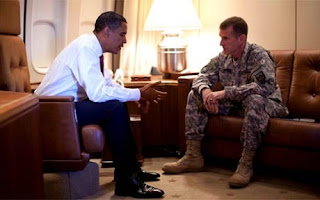 General Stanley McChrystal reportedly mocked VP Joe Biden as a nobody and said President Obama wasn't prepared to talk to him and wasn't paying attention. According to the report, McChrystal called the Obama meeting a photo op and said Obama looked "uncomfortable and intimidated" by the roomful of military brass. After hearing the remarks, President Obama became furious and called General McChrystal to Washington to explain himself. Robert Gibbs told reporters, Obama may show McChrystal the door.

A furious Joe Biden called Obama last night to tell him to read the now-infamous Rolling Stone profile. A shocked Obama swiftly distributed the article to his senior advisers and held an emergency strategy discussion, in which they decided to call McChrystal back to Washington for the face-to-face. Asked about McChrystal’s complaint that Obama wasn’t paying attention to him, Gibbs replied, “He’ll have his undivided attention tomorrow.”

Reportedly, McChrystal has beat Obama to the punch and offered his resignation.

A senior Capitol Hill source tells me that General Stanley McChrystal had tendered his resignation to President Barack Obama and that the White House is actively discussing a replacement who could be quickly confirmed by the Senate.

The source said that among the names being touted as possible successors are General James Mattis, the outgoing head of the US Joint Forces Command and due to retire after being passed over as US Marine Corps commander, and Lieutenant General William Caldwell, commander of Nato’s Training Mission in Afghanistan.

Of course, offering to resign is not the same as actually resigning and it remains to be seen whether Mr Obama will accept the resignation. Donald Rumsfeld offered to resign as Pentagon chief on more than one occasion but President George W. Bush requested that he continue in post before eventually firing him on November 2006.