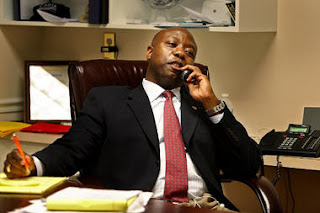 Black Republican Tim Scott has won the South Carolina GOP primary after defeating Paul Thurmond, the son of the late U.S. Sen. Strom Thurmond, in a primary run-off. Scott's congressional district is heavily Republican and he is expected to win easily this fall. Tim Scott had the endorsement of Sarah Palin.

Scott is now a heavy favorite in a district that has elected a Republican congressman for three decades. He is poised to become the nation’s first black GOP congressman since 2003 when Oklahoma’s J.C. Watts retired.

The 44-year-old Scott was the first black Republican in the South Carolina legislature in more than a century when elected in 2008. Before that, he served 13 years on Charleston County Council.